This post goes over Amazon’s Dynamo paper that was the foundation of today’s various key value stores like Cassandra. Also, this is a very good paper to read to get introduced to various distributed system concepts and to me feels like one of those rare papers that are easy to read and understand.

Why was it built?

Dynamo was built to address the requirement of building an highly available shopping cart for Amazon, which allows the customers to always add items to a cart. It is a very important property of that cart since an unavailable cart means a loss in order of magnitudes for Amazon due to drop in orders and a very bad customer experience.

The paper tries to pin point the fact that in those days everything was stored in RDMS ( Oracle ) databases which are painful to maintain for higher availability and scalability. Also, a shopping cart application do not need a full fledged RDMS solution as they do not need to perform any rich queries on that database. What they needed was a simple data store with a simple query model which is highly available always allowing customers to use their cart.

Dynamo chose ‘A’ (as in availability) from the CAP theorem as required by their business use-case. It means, it chose to be highly available by using optimistic replication techniques where the changes are pushed to the replicas in background resulting in eventual consistent data storage; that is all updates reach all replicas eventually. This however can lead to conflicting changes which must be detected and resolved.

When and who performs conflict resolution

Since Dynamo targets an ‘always writeable’ data storage, it does wants to have the conflict resolution during reads hence allowing writes to never get rejected. If the conflict resolution was done during writes, it could be possible that some writes may be rejected if the data store cannot reach all (or a majority of) the replicas at a given time.

The next design choice is who performs these conflict resolutions - data store or the application. If it is datastore, then it’s choices are limited where it can use simple policies like “last write wins”. However, if it is the application, then since it is aware of the data schema it can make better decision suited best for the customer experience.

The system should be able to scale one host/machine at a time with minimal impact on the availability.

There should be no special nodes in Dynamo with no centralized controllers or leaders. Every node performs the same responsibilities as its peers.

The system should run smoothly with a heterogenous fleet of the servers.

The Dynamo architecture can be summarized as:

As noted above, one of the key requirements of Dynamo is to scale incrementally which requires a mechanism to dynamically partition the data over the set of nodes. For this, it uses consistent hashing where the output range of the hash functional is treated as fixed circular ring (the largest hash value wraps to the smallest value).

Each node in the system is assigned a random position on the ring such that it owns the hash region between itself and its predecessor.

Dynamo however adds a variation to the consistent hashing by having a concept ‘virtual’ nodes where each node gets assigned multiple points on the ring instead of just one. This allows the system to get away with problem of non-uniform data and load distribution that can happen with assigning just one random location.

To ensure high availability, Dynamo replicates each data item on multiple (N) hosts/nodes in the system. Each key is assigned to a coordinator node (the node that first falls in the range) which first stores the data locally and then replicates it to N-1 clockwise successor nodes on the ring. This results in each node owning the region on the ring between it and its Nth predecessor. The list of nodes responsible for storing a data item is called the preference list.

To provide high availability, Dynamo chose the version reconciliation during read rather than on write as it always wants the data to get written. It uses vector clocks to capture causality between different versions of the same object. From the paper, 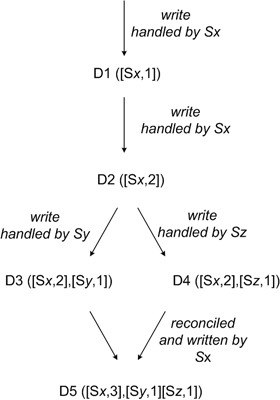 Execution of get() and put() operations

It can be seen that setting R + W > N will result in a quorum like system (typical configuration). However, the latency of put() or get() operation is then dictated by the slowest among W or R hosts so its better to keep values of R and W less than N.

For a put() request, the coordinator node first creates a new vector clock and uses that to store the data locally. It then forwards the new version along with the new vector clock to N highest ranked nodes skipping the unhealthy ones.

For a get() request, the coordinator requests all the existing versions of data for the key and then waits for R responses before returning the result to the client. If it receives multiple versions that are causally unrelated then it send back all those versions which will then be reconciled by client.